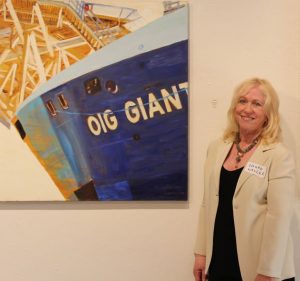 On view in the main gallery of the Alliance for the Arts is a two-artist show titled Along the Coast. Sarah Hull invites viewers to explore feelings of loneliness and isolation within the confines of surf-side recreational spaces, while fellow Tampa artist Laura Waller cajoles viewers to join her on an abstract exploration of massive commercial vessels where they alone control the path and destination of the journey. 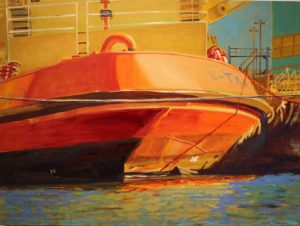 To appreciate what Waller has accomplished with the paintings in this series, it is helpful to harken back to some lessons taught roughly 150 years ago by the Impressionists. Then, painters such as Manet, Monet and Renoir operated from the premise that in real life, our eyes are only capable of focusing on a single spot at any given point in time. The rest of the picture is supplied not by our optic nerve, but our minds. We know what’s in the background or periphery of a scene, but we don’t actually see it in the depth or detail previously provided by realists and hyper-realists like DaVinci, Rubens and Vermeer. 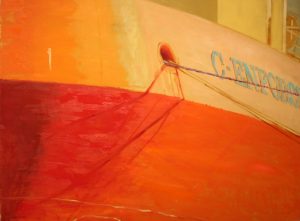 Waller applies a similar concept to her paintings of massive cargo ships and commercial freighters. Except from a great distance, you simply cannot take in a 400 or 500 foot vessel all at once. Because of their size and scale, you can only experience a ship like this by focusing on some detail or component part. 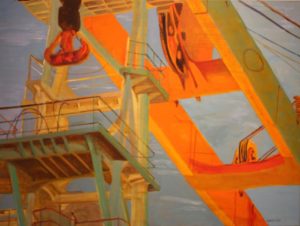 “By focusing on some detail or portion of the vessel, I’m asking the viewer to join with me in an exploration,” Laura explains. “The vanishing point is well off canvas, so you know it’s a massive ship that goes way back. You know it’s there, but I’m asking you to experience it in a different way.” 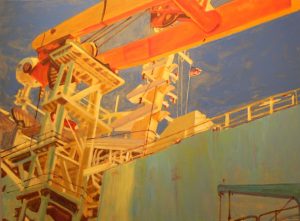 But Waller’s compositions provide an even greater degree of immediacy. If you stand close to the linen support, you see a collection of one-dimensional shapes and colored planes. But as you stand back, an image emerges that depicts some part of the vessel that suggests or implies the existence of the entire ship in much the same way as viewing a tusk, trunk or tail connotes the presence of an elephant. 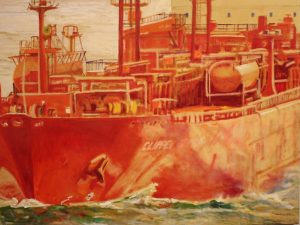 This result obtains because of the way in which Waller creates her compositions. “When I paint, I’m standing at the length of the brush from the support,” explains Laura. “It’s only when I stand back that the form emerges from the brushwork.” 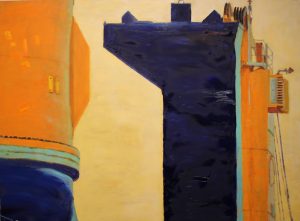 Up close, there’s a very abstract quality to these paintings. The emphasis on flat color, geometrical shapes, parallel lines and other forms is vaguely reminiscent of Mondrian’s use of the pure geometric forms underlying all existence to convey absolute reality. But as you retreat from proximity to the canvas, the composition becomes representational. Even then, however, your mind has to finish the image because the actual subject extends hundreds of feet off canvas. 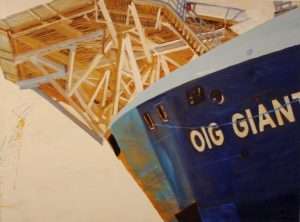 “I like to subject matter where if you made a viewfinder with your hands, you can go anywhere within the composition and find something interesting to look at,” Waller adds. “This lets viewers choose which part of the composition to connect with, and that enables them to have a different experience each time they look at the painting. If you do a representational painting of the entire ship, you’re telling the viewer what to see. But here, they get to choose the relationship they forge with the composition.” 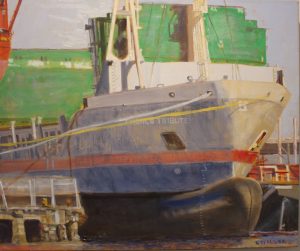 Laura’s developed an interest in cargo ships, freighters and tugs after a friend suggested she visit the Port Tampa Bay for nontraditional Florida motifs. 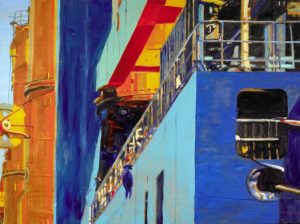 “I didn’t really want to do cruise ships because the shapes are not that interesting compared to other ships, so when someone suggested the working port, I became intrigued.” 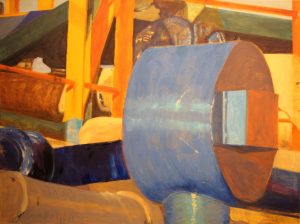 Of course, you just can’t go wandering about a commercial port handles more than 37 million tons of cargo annually, ranging from liquid and dry bulk to containers and automobiles. 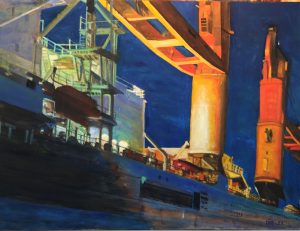 “I got one of the big companies to sponsor me. They gave me a hard hat and an adorable security guard in a golf cart, and we rode around and took pictures, which I took them back to the studio to paint.” Painting on location was not an option because while the port was happy to assign a security guard to show her around, they couldn’t spare someone to sit with her all day as she painted. 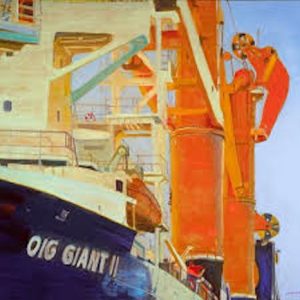 Still, her time in the port was as exciting as it was novel. “I’ve always been intrigued by what I call ‘drop-ins’ – where you’re dropped into a new environment, someplace you’ve never been before. It’s a new world. There are very few women in the port. People can’t see the port when they drive by, so they don’t really know what’s in there.” 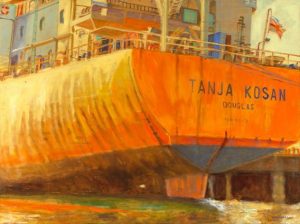 In addition to the time she spent being squired about the port by security, Laura also accessed the port aboard her son’s power boat, and she did have occasion to cop a ride on a 12,795 ton, 472-foot-long freighter named Clipper Newhaven that sails under the flag of the Marshall Islands. 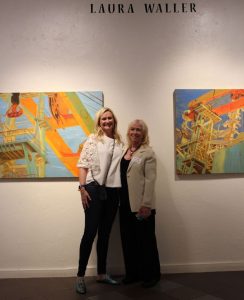 “You cannot go in or out of the harbor without a harbor pilot taking over the ship. There are only two female harbor pilots in all of Florida, and I got to go with the one at the Port of Tampa when she took Clipper Newhaven out to sea,” Laura recounts. Although Laura did not identify her by name, that would have been Capt. Carolyn Kurtz. She is one of 23 harbor pilots working for the Tampa Bay Pilots Association. The rest are all males. (The only other female harbor pilot in Florida works in Port Everglades in Fort Lauderdale. Out of 1,200 harbor pilots nationally, just 30 are women.) 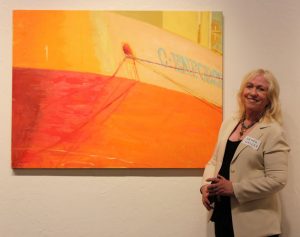 “When we got out in the Gulf, a pilot boat pulls up alongside the ship and [Capt. Kurtz] tells me we’re going down to get off the ship,” Laura continues, a wry smile tugging at the corners of her mouth. “Well, I didn’t realize until that very moment that they don’t stop the ship. It’s going along at 12 knots, and [Carolyn] says, ‘Don’t get upset, Laura, and don’t look down, but we’re going to climb down that rope ladder hanging off the side of the ship. I’ll go first, and when it’s your turn, just take one step at a time and when you get to the bottom, reach back, and I’ll pull you onto the pilot boat.’ I didn’t look down, but I was thinking the whole time that if I die, I’m going to have the best obituary – crushed between two ships.” 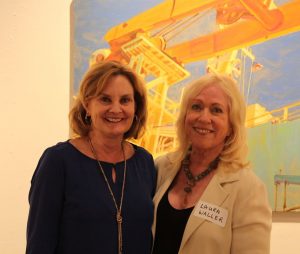 Obviously, she did just fine and now has a Laura Croft moment to share at art exhibition opening receptions. 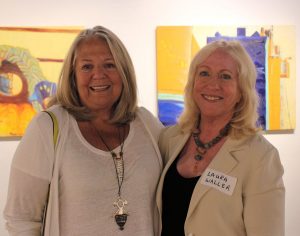 Laura found it interesting to not only learn all the different parts of the ships she painted, but their history, as well. When a collector acquires one of these nautical works, they not only get a nuanced, ever-changing painting, they become privy to the history of the vessel. And through a vessel tracker app, they can follow the ship’s whereabouts on their phone. In fact, the tracker even sends out notifications. 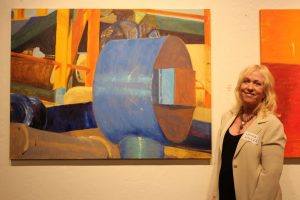 Laura has no plans to add to the series. In her mind, it is now complete. Instead, she is now painting commercial and residential buildings under construction, as well as industrial processing site. “After a private hardhat tour of an historic cement plant in Maine, I was inspired to explore similar industrial sites as part of my ongoing investigation into urban landscapes.”

As she did with ships at port, Waller feels equally compelled to uncover what lies beneath the surface of massive, imposing structures – buildings and industrial plants which are historic as well as others not yet complete. “It is their dynamic sense of scale that I seek to convey through tight, focused composition of color and form.”

And as with her ships at port, the new series of urban landscapes will be devoid of either animal or human figures. “I am primarily in what humans have built; the awe-inspiring powerful character and tension of interior or exterior spaces,” Laura explains. In her capable hands, each of these new constructions becomes an intimate personal portrait that reveals complex multi-layers, underpinnings and exoskeletons.

Along the Coast runs through May 26 at the Alliance for the Arts. For more information, please visit artinlee.org or telephone 239-939-2787.