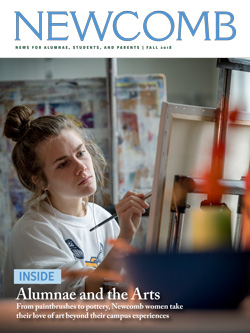 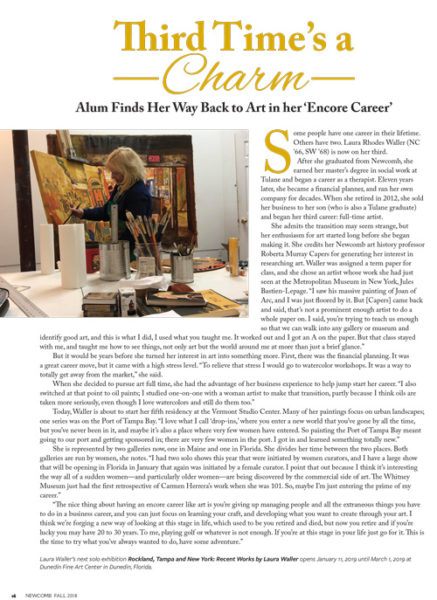 Some people have one career in their lifetime. Others have two. Laura Rhodes Waller (NC ’66, SW ’68) is now on her third. 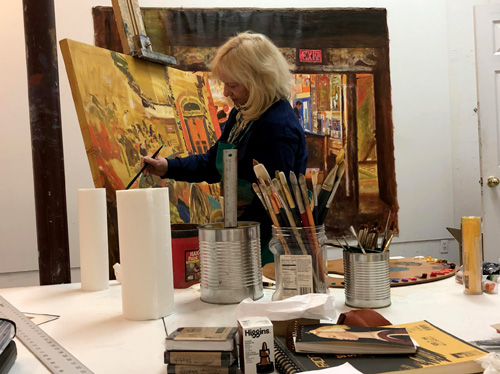 After she graduated from Newcomb, she earned her master’s degree in social work at Tulane and began a career as a therapist. Eleven years later, she became a financial planner, and ran her own company for decades. When she retired in 2012, she sold her business to her son (who is also a Tulane graduate) and began her third career: full-time artist.

She admits the transition may seem strange, but her enthusiasm for art started long before she began making it. She credits her Newcomb art history professor Roberta Murray Capers for generating her interest in researching art. Waller was assigned a term paper for class, and she chose an artist whose work she had just seen at the Metropolitan Museum in New York, Jules Bastien-Lepage. “I saw his massive painting of Joan of Arc, and I was just floored by it. But [Capers] came back and said, that’s not a prominent enough artist to do a whole paper on. I said, you’re trying to teach us enough so that we can walk into any gallery or museum and identify good art, and this is what I did, I used what you taught me. It worked out and I got an A on the paper. But that class stayed with me, and taught me how to see things, not only art but the world around me at more than just a brief glance.”

But it would be years before she turned her interest in art into something more. First, there was the financial planning. It was a great career move, but it came with a high stress level. “To relieve that stress I would go to watercolor workshops. It was a way to totally get away from the market,” she said.

When she decided to pursue art full time, she had the advantage of her business experience to help jump start her career. “I also switched at that point to oil paints; I studied one-on-one with a woman artist to make that transition, partly because I think oils are taken more seriously, even though I love watercolors and still do them too.”

Today, Waller is about to start her fifth residency at the Vermont Studio Center. Many of her paintings focus on urban landscapes; one series was on the Port of Tampa Bay. “I love what I call ‘drop-ins,’ where you enter a new world that you’ve gone by all the time, but you’ve never been in it, and maybe it’s also a place where very few women have entered. So painting the Port of Tampa Bay meant going to our port and getting sponsored in; there are very few women in the port. I got in and learned something totally new.”

She is represented by two galleries now, one in Maine and one in Florida. She divides her time between the two places. Both galleries are run by women, she notes. “I had two solo shows this year that were initiated by women curators, and I have a large show that will be opening in Florida in January that again was initiated by a female curator. I point that out because I think it’s interesting the way all of a sudden women—and particularly older women—are being discovered by the commercial side of art. The Whitney Museum just had the first retrospective of Carmen Herrera’s work when she was 101. So, maybe I’m just entering the prime of my career.”

“The nice thing about having an encore career like art is you’re giving up managing people and all the extraneous things you have to do in a business career, and you can just focus on learning your craft, and developing what you want to create through your art. I think we’re forging a new way of looking at this stage in life, which used to be you retired and died, but now you retire and if you’re lucky you may have 20 to 30 years. To me, playing golf or whatever is not enough. If you’re at this stage in your life just go for it. This is the time to try what you’ve always wanted to do, have some adventure.”