Artist Laura Waller’s new series of 25 paintings puts the spotlight on the gritty grandeur and bustle of Tampa’s most important international commerce hub — Port Tampa Bay. The series will be available for viewing at the Clayton Galleries in South Tampa beginning January 23 through March 7, 2015. 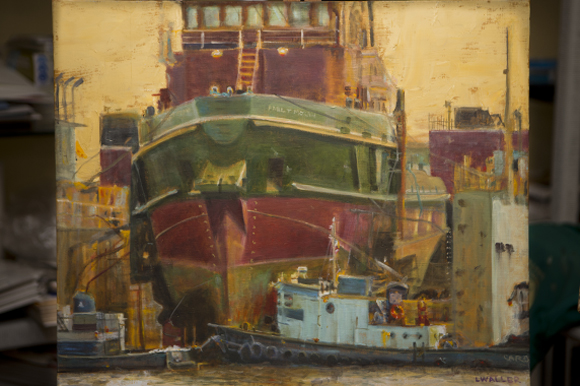 Waller’s work — in water-based oils for this series — provides a warmth and an impressionistic feel in how she treats light, though any softness of more often painted subjects, say, haystacks or water lilies, is entirely absent. Imposing, formidable ships with all their rugged, angled accoutrements – heavy, steel, potentially lethal (should they snap) mooring ropes, forklifts, tugboats and a ubiquity of rust — instead lend the viewer the true brute perspective of human-to-craft scale at the Port.

“The feeling you get is a lot like looking up at a skyscraper in New York, like you are going to fall over,” Waller describes. “The ships set the narrative. The people are insignificant in these massive boats.” 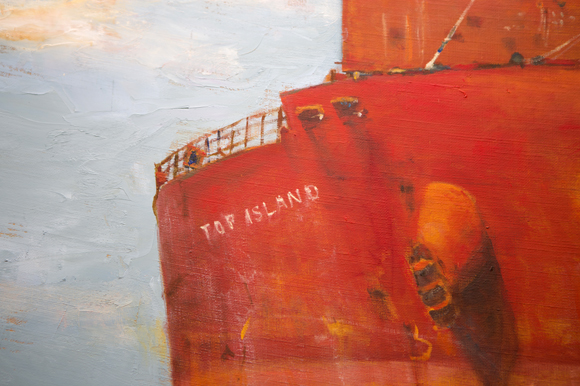 To behold raw industry through the eyes of an artist like Waller brings a level of beauty, color and interest rarely bestowed upon such a subject. In fact, the existence of this particular subject, Florida’s biggest Port, is all but ignored by most, save for the occasional cheer surrounding the comings and goings of cruise ships.

In reality, the gravitas of Port Tampa Bay and its impact on the state’s economy cannot be underestimated.

The local Port in the heart of downtown Tampa represents $15.1 billion in economic activity and provides directly or indirectly 80,000 above-average-salaried jobs, according to Edward Miyagishima, Port Tampa Bay Senior Advisor in citing a 2013 economic impact study.

It is currently the largest and deepest port in Florida – with 5,000 acres and a depth of 43 feet, though Miami and Jacksonville have plans to deepen their ports soon. Put in context, Tampa’s Port is about 10 times the size of Miami’s in terms of acreage. It is also the largest in Florida in terms of tonnage shipped of phosphates and petroleum.

From Backyard to Shipyard

Waller’s Port paintings are an expansion of her 2009-2013 East Coast-West Coast series in which she became intrigued with the everyday environment of the working waterfront.

On the East Coast, she discovered, “you interface with the water close-in,” and decided it was time to explore more closely her own backyard.

“I started researching the Port Tampa Bay,” she says. “Usually you think of the cruise ships, but its so much more than that. The port is where, historically, civilization spread and commerce grows. Tampa is a big city, because we are a port.”

She wanted to experience the Port first hand. This is easier said than done.

As Miyagishima says, “Ports are mysterious. Everyone walks through the airport, you don’t get that opportunity at the port.” Homeland Security and safety regulations keep access tight; the Port is generally closed to the public. 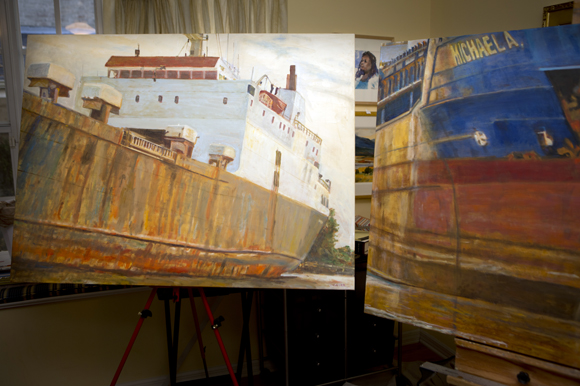 Waller’s persistence paid off and thanks to a connection at Gulf Marine Repair – part of the Hendry family shipyard operations that have been in service at the Port Tampa Bay for nearly 90 years – she was granted permission to explore the Port. Accompanied by a guard at all times, she took hundreds of photos from the docks and was also permitted access from the water, her son maneuvering through the port in his small boat, a visit she terms “a primordial experience.”

Waller’s fascination with the Port only grew from there. Most of the paintings for this series are named for the ships portrayed “so that you can follow them” as she often does, watching their journeys through pirated waters and dangerous straits thanks to vessel tracker technologies. She imagines the stories, how civilization must have once watched “gorgeous parfait colored ships coming around the bend. … Vikings ready to plunder.”

Even the maritime vocabulary and equipment requires a learning curve, which Waller describes as “almost like calligraphy.” She says she would like to go back and have the opportunity to accompany a harbor pilot – the specialist who boards and guides the barges and ships safely to dock – and also to photograph the port at night.

A Personal Journey, Too

Waller’s route to professional artist has been an interesting journey in its own right.

Founder and CEO of Waller & Wax Advisors, Waller was a successful certified financial planner based in Tampa for more than 30 years. For nearly as long, she has found refuge in another port town of a different flavor: Rockland, ME.

“It’s the only way I could get away from the stock market!” she says. While her left-brain was wrapped up in her day job, she continuously nurtured her artistic side studying and painting watercolors, particularly during the time she spent in Maine.

While Waller was more than accustomed to helping others plan their transitions into retirement, her own transition was marked by a diagnosis of breast cancer in 2005 and her treatment at the Mayo Clinic in Minnesota. There, she was encouraged to participate in the biennial Eli Lilly Oncology on Canvas Program, entering a watercolor painting that was included along with the passage she wrote about it, in the exhibition that traveled to the Royal Academy of Art in London and worldwide.

“The passage spoke about cancer giving permission,” says Waller. “That is truly the gift of the experience, and led to my choosing to pursue art full time and to selling my practice to my son.” 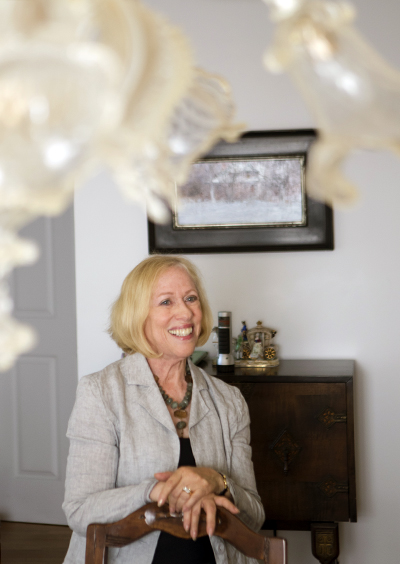 Since making that transition in 2011, she has also changed her media of choice to water-based oil and studied closely with artist Tina Ingraham to perfect technique. Waller has since won numerous awards, has exhibited at galleries and shows throughout Florida, Maine and Oregon, and has received three fellowships to the prestigious Vermont Studio Center Residency in Arts Program (the third will be in 2015).

Bringing the Images to the Public

Cathy Clayton, founder of Clayton Galleries, an established gallery in South Tampa that typically represents Florida artists, says she knew Waller as a friend, a neighbor, a financial advisor and a collector for the past 15 years. She’s been watching Waller’s career and development as an artist and says she was impressed when Waller started focusing on her artistic expression “in a very linear, professional way. I am really happy the way she has changed and evolved into a fine artist.”

When Waller shared her Port project with Clayton, Clayton felt “this is the time [to represent Waller]: Let’s introduce this series.”

Clayton says there is already tremendous interest in the project from the Port and the City of Tampa and anticipates more so when the series is displayed in its entirety. A piece from the series is already on exhibit at the Fine Art Exhibition at the Tampa Bay Lightning Amalie Arena, and another has been requested from a museum in Oregon.

“She found the beauty, the poetry in industrial boats,” says Clayton. ”That makes you pay attention.”