Skip to content
Oh, ship! When painting leads to jumping from boats. 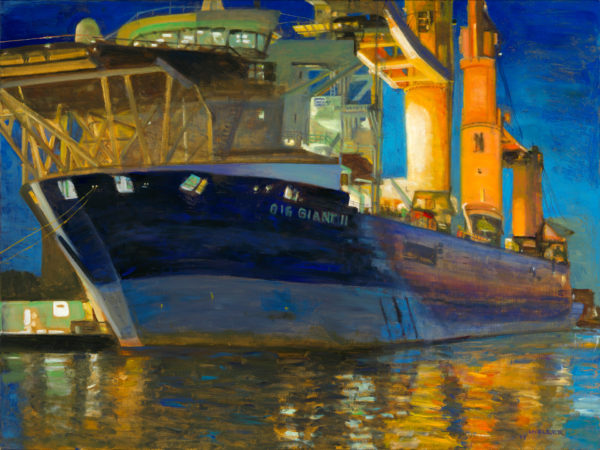 “She said all you have to do is turn around and hold on to the rope ladder and climb down one step at a time. ‘Don’t fall because it’s a lot of paperwork,’ the harbor pilot joked.” Laura Waller explains how she exited a freighter ship onto a pilot boat when both were traveling at 11 knots. (I’m imagining “Bon voyage!” may have been shouted as she leaped from one vessel to the next.)

Who knew painting could be so adventurous? Waller is a regular at the Port of Tampa — one of the few women seen there— to take as many photos as she can for her large paintings of the freighters that come through our town. On this particular excursion with harbor pilot Captain Carolyn Kurtz, the only way to get back to land is to jump: no safety rails included. She jokes, “I told my husband if I had died, it would have been the best obituary.”

I managed to catch Waller at her home studio just a few days before she left Tampa to go to north for the summer, where she will finish prepping for her seven-week solo show. The show opened June 9 at Elizabeth Moss Galleries in Falmouth, Maine and featured 15 new paintings. 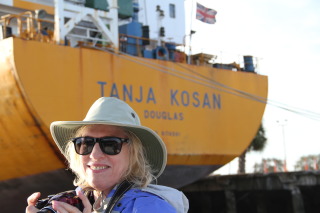 “I just finished this one, it’s my biggest painting. It’s five by seven feet; it will be in the solo exhibition at Clayton Galleries in Tampa opening January 27, 2017,” she says. “I go into the port to take pictures, because they won’t let you set up to do plein air due to security issues. My real love is the ships: the tugboats and the big freighters that come through our port. Going out with the harbor pilot for a day was quite an experience, and it was really fun. So from that trip, these are resulting.” She points to new canvases lined against the wall.

Though she paints from photos, they look nothing like the picture, which is actually a good thing. The snapshots are sterile in comparison. Her honest representation does the ships more justice because of their emotive appeal to the senses. A palette of reds, orange cadmiums, Naples yellow, and a bit of cobalt violet brings intense glow and radiance to her paintings.

“I’ve always lived on the water, either in Florida or Maine, and even when I was in New Orleans for undergraduate and graduate school at Tulane, so I like the water. I started painting boats — not the freighters — in Maine and I liked it, but everyone paints them. People asked, ‘Why don’t you paint Florida?’ Everybody who paints Florida paints the beaches and the palm fronds. I was asked, ‘Well, what about the ports?’ I didn’t think I would be able to get in the port, but a friend sponsored me, and thus began my love affair with the working port.”

In previous paintings, more of the freighter is included in the overall composition, but now she is interested in pulling the viewer in with close-ups. 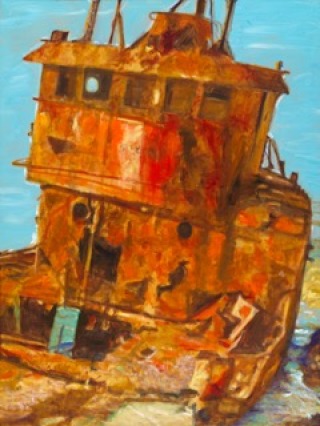 “You can see I’m getting more abstract with these,” she says, looking around her studio. “Close up, it’s a totally different view. When you get close, the shapes, colors, and the rust reveal themselves. For me, the rust makes them beautiful. It’s like the Japanese concept of wabi-sabi where beauty is found in things that are humble and ordinary.”

With the close-up views, she places focus more on the shapes of different ships’ parts, abstracting it from easy recognition. This nearsighted positioning, paired with the scale of these large-format canvases, pushes the viewer right into the scene, making one feel that they may be in the midst of these large vessels.

Waller started her first large paintings at her residency at Vermont Studio Center (where she has been three times) and realized the large scale is demanded by the size of the cargo ships.

She always manages to capture a sense of mood in her paintings. Some have a more mysterious fog hanging over them, while others carry a luminosity of painted layers. Taking in the overall size of the pieces, you slowly start to notice the small details that tend to get lost if you become awestruck by these behemoths.

“Early one Sunday morning, my son drove us in his power boat through the port. It was quiet. To me, it felt like I was in primordial times surrounded by massive giants tethered to the shore, ready to wake,” she says.

“This is the last one I’m painting before I leave for Maine; [it’s] called the Tanja Kosan. Let me tell you, this tanker is huge (over 350 feet long) and the pilot is my height. She takes these huge ships in and out of our port. I told her that I’ve painted this yellow ship many times, and she told me that compared to many of the other ships that come in and out of our port, this one is on the small size. The pilots had renamed it the ‘Petite Flower,’” Waller says. 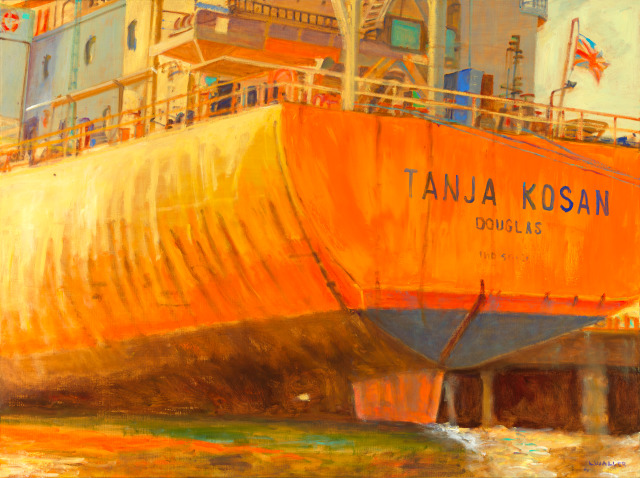 She writes down the names of the ships she paints; an app called Vesseltracker tracks the ship’s progress across the ocean. With one boat, once it gets to the Straits of Malacca, a message pops up, “Armed Guards on Board,” meaning that they’ve taken on men with rifles because it is a dangerous place known for pirates.

Waller says, “You think about the risks these people take,” and not only with heavy machinery and piracy, but also natural disasters.

She shows me a painting of a boat that washed up in a friend’s backyard. “You can see it’s just being eaten up by the sea. Eventually it won’t be there, and it will return to the sea,” she says poetically.

In a way, these close-up paintings are portrait-like: the boat’s details are moody and emotive, not unlike a human face. Boats constantly flow in and out of the port, as temporal, silent nomads without a true home. 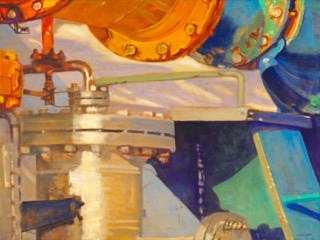 “There are only about two paintings I’ve put people in because the ships are really the ‘narrators.’ They kind of talk about what they are doing. Even the anchor over there: Just look at the force of it, like it’s biting the part where they pull it into the ship. It’s almost sensual, that particular painting. She’s my Georgia O’Keeffe painting,” she jokes about her interlocking forms.

Another painting she calls her “Drama Queen” with the way the ship is draped in ropes, as if bedecked by strands of necklaces. Waller brings sensuality to the masculinity of the port through the freighter’s curves, softness of edges, and inviting color palette.

Waller worked as a financial planner for 33 years; she took watercolor classes to escape thoughts of work. Eventually, she decided to sell her practice to her son to paint full-time with a focus on water-mixable oil paints.

“I came up through the workshop route where we learned about technique, such as making sure you have a center of interest. That has changed for me as I think you should be able to take any small section in a painting, and it could stand alone and be a painting in itself,” she says, elaborating that there should be a mix of other areas of interest (as well as places for the eye to rest) in addition to the focal point. 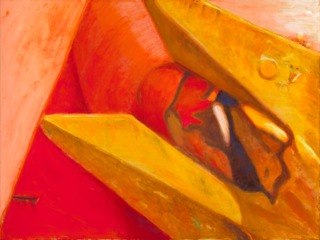 Her residencies at Vermont changed her outlook on art-making. Instead of focusing mainly on technique and skill, she started questioning what she was trying to say in her pieces.

“I feel like my role as an artist is to record this period of Tampa’s history because really, Tampa exists because of the port. All of the great cities were founded because they were port cities, and that’s where the immigrants came in,” she says. “The port also produces a huge amount of revenue for the city, yet people look at the ports and just think of the cruise ships. I want the country to see how much these workhorses of the sea create for us, and we’re not even aware of it.”

As a recent recipient of an Individual Artist Grant this year from the Arts Council of Hillsborough County, as well as the Carolyn Heller Visual Arts Award (given to the highest scoring visual artist), Waller plans to use these funds for a brochure for her solo show at Clayton Galleries (Jan. 27- Mar. 11, 2017) which will feature 23 new paintings.

Waller says, “There’s this wonderful video Helen Mirren did where she talks about going into galleries. She said that she first likes to put her chair this close [indicating with her hands a small space] to the painting, because that’s where the artist is. So she gets our view before she steps back. Most people wouldn’t think to look at a work of art like artists do.” 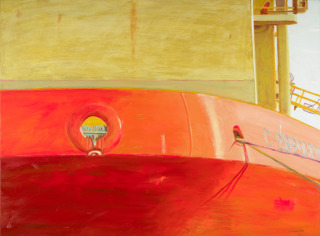 Standing about a foot from her linen-stretched painting, my eye catches the shadowing under a brush stroke, highlighting the varying thickness in paint handling. The mark separates the paint, leaving thick waves of oil paint on either side of the line made on the canvas, mimicking the wake trailing from a slow-moving boat.

“Laura, you paint the grit that starts the pearl,” an artist once told her.

I couldn’t explain her work any better myself.

To see more of Laura Waller’s work, visit her website.

Urban Dictionary defines Femme Fatale as “a woman with both intelligence and sex appeal that uses these skills to manipulate poor helpless men into doing what she wants. May cause death.” Keeping in line with this concept, the women highlighted in Caitlin Albritton’s “Femme Visuale” series aims to highlight local women artists and show off some lesser-known talent that’s been hiding in the shadows. In the art world, if it ain’t big and loud, it ain’t being seen (looking at you, Koons). Art as a grand spectacle leaves little room for modest, sincere, or quiet voices, especially women’s voices. And I promise, we won’t bite.